Gaming PCs are special when it comes to computers. They’re powerful, stylish, and a good gaming rig can do almost anything a regular workstation can do.

While many would recommend building your PC, for many others, just buying an amazing full set out of the box takes all the stress out of choosing which parts to buy and how to put them together. But buying a pre-built PC requires more research than you might think. The most crucial thing to consider is price.

Most laptops and desktops these days come with built-in features that rises the price but are not really necessary. It can be intimidating to even look at the list of available options. But don’t panic because this article will give you all the information you need to buy the best high quality gaming PC for just under $1000.

So, without further ado, let’s take a look at the best gaming PCs you can buy under $1000.

After careful research, we’ve come up with a list of the best gaming PC under $1000 that are available on the market.

The CyberPower Xtreme is capable enough to tend to all your gaming requirements and more. It offers great performance because of the powerful combination of CPU and GPU inside. The processor is the i5-9400F, considered as one of the top gaming CPUs, also supported by NVIDIA’s GTX 1660.

GTX1660 is great for 1080p gaming with fair benchmarking outcomes at 1440p as well. With this, you should be able to play most AAA games at high settings without worrying about frames drops.

Whether you’re a newbie, mid range or hardcore gamer, this PC has got you covered. Other than the components, you also receive a PC case that has pre-installed RGB fans, a PSU shroud, and a window to see inside.

Finally, you also receive a CYBERPOWERPC keyboard and mouse so you can jump right into these games as soon as they arrive.

Skytech Archangel is an ambitious gaming PC that is both powerful and stylish. It cradles a GTX 1050Ti which is more than powerful enough to run most modern games at high frame rates and also comes with the beating Ryzen 3 1200 processor.

The Archangel is not only powerful but also beautiful. Instead of the old red/black design that we see everywhere else, it rocks a refreshing white and blue color scheme. The case is metallic with an elongated V-shape face and the lower half includes, LED lighting bright blue color.

The only big limitation of this PC is that it doesn’t have liquid cooling which is not necessary, but it also only has a single fan so it is recommended to be kept in a cool place with lots of airflows.

Accessing the interior will provide room for an additional RAM unit and also PCIe slots for later upgrades. Although the 8 GB RAM is enough for almost all applications, you can utilize the additional slot to improve performance. The machine typically contains a 500W power supply, which might also be good for an upgrade.

In this price range, it’s hard not to consider the Archangel. It is beautiful, powerful, and easily upgradeable.

The HP Pavilion 690-0073 is a PC all about simple smooth performance that’s easy on your wallet. Compared to the other choices on this list it has a tamer design, with an almost all-black cast with a few hints of green light here and there. But don’t underestimate this monster just because of how simple it looks because when it comes to power it’s just as strong as any other PC on this list.

It rocks a 9th gen Intel® Core i5-9400f processor just like the Gamer Xtreme so you know it’s fast, and as for the video card, it has an NVIDIA GTX 1660Ti which is the most powerful card to appear on this list so far. It runs on an 8 GB RAM card and has an extra slot for any upgrades you’d want to make in the future.

The one setback for this PC is the really low hard disk capacity. It has only 256 GB of hard disk capacity which in modern standards is low as some modern titles can cover almost all of that space. But it isn’t the worst thing in the world. Another thing to look out for might be the 400W power supply. Although we don’t think this is a big deal as the PC itself doesn’t consume a lot of power, it may be a concern for some readers.

While it lacks in design and storage, if you’re someone who doesn’t care about the looks and want a PC purely focused on gaming, the HP Pavilion 690-0073w might just be the PC you are looking for.

The Skytech Chronos is a smooth gaming PC. It runs on the AMD Ryzen 3 3100 4-Core 3.6 GHz (3.9 GHz Turbo) processor which is on par with Intel’s i5 processors and is backed by a GTX 1650 SUPER. Both of these components are more than powerful enough to run most modern AAA titles at medium to high settings.

It has a glass side window and front-panel trim with three LED fans, which is undeniably smart and sleek. This is an attractive gaming PC that provides great aesthetic along with great performance. The 3x ARGB Dual RING Fans offers maximum airflow which keeps cool. It runs on 8 GB of RAM with an extra slot available if you ever wish to upgrade it. It also has 500GB SSD which is three times faster than HDD and is powered by a 550W power supply.

With specs like these you know you’ll get good overall performance with no thermal issues. If you’re on a budget and you want a good gaming rig you cannot go wrong with the Skytech Chronos Gaming PC. The SkyTech Chronos is a gaming PC that looks and feels great at the same time. 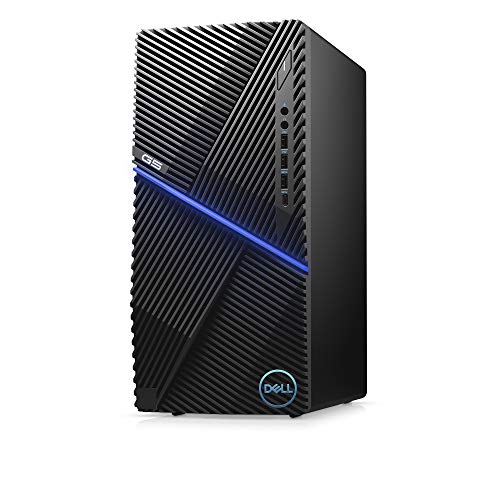 The Dell G5 is a heavily built gaming PC. Engineered with the Intel Core i7-9700 processor, the G5 Gaming Desktop has powerful performance and responsiveness in a fraction of a second. It features an NVIDIA GeForce GTX 1660 6GB GDDR5 graphics card for high powered gameplay and VR-capable performance.

The G5 has a unique design compared to most other gaming PCs. It’s not flashy like the Archangel, but it’s not overly simple like the HP Pavilion. It is designed with a light blue stripe on the front and the rest of the body is mostly black.

It has a large number of USB ports on the front and back and has plenty of storage inside for future upgrades. It also has four thermal modes, but no liquid cooling, unfortunately, but it doesn’t have any heating issues.

The Dell G5 has a powerful CPU and GPU, and if that’s not enough it’s also very easy to upgrade. This PC is for people who don’t want to spend too much on a gaming desktop right now but also want to upgrade later. So, if you’re one of those people then the G5 is highly recommended for you. It can be difficult to choose a gaming PC these days as there are so many options available in the market. And if you are new to PCs, it can be even more confusing to pick a PC that is right for you.

So, to help you out here is a quick buying guide showing you what you need to watch out for before buying a gaming PC.

The processor specifies a system’s performance in the software, so it makes sense that this is the first thing you look at when buying a PC. The core count of a processor requires special attention. There are many options ranging between 2 and 16 cores in the conventional space. Except in the case of an intense budget, a 4-core chip is the minimum recommended option, to avoid performance issues.

Despite that, due to current prices, a 6-core chip is good enough to start. If you are looking for high-power work, go for 8 or more cores, depending on the software’s ability to utilize the large core count.

A graphic card comes next on the list of consideration before making a purchase. It is the component that has the biggest role in enriching your games with high frame rates, and makes high resolutions playable.

There are plenty of video cards out there, from the entry-level AMD RX 570 to the new, more powerful RTX cards from NVIDIA. Model numbers show a lot about the product.

More numbered cards mean more performance, although there are a few caveats and over-clocked models from third party GPU associates that can fill in the performance gaps between different versions.

Save Money on RAM

Most modern games only require 8 GB of RAM to function smoothly. Even the biggest AAA games only need 16GB of RAM, and yet there is this weird obsession among people for high RAM.

Additional memory beyond 16 GB is usually left unused. Thus, money that could be used on RAM that’s over 16GB should be spent on other components with greater impact on performance, like a CPU or GPU, unless you also plan to edit long4K videos on your PC.

I’m sure there are many more questions you want answers to, as such we’ve compiled a list of the most frequently asked questions people have about these gaming PC.

What Are Some Good Specs for a Gaming PC?

This is a question with numerous answers depending on the budget needs and preferences of the consumer. However, a PC with i5-9400F CPU, a GTX 1660, and 8 to 16 GB of RAM is more than efficient enough to run any modern AAA game if you’re on somewhat of a budget.

How Much RAM is Needed for a Good Gaming PC?

Most modern titles run fine on 8 GB of RAM but for the most optimal performance, 16 GB is more than enough. Anything more is unnecessary is you’re not planning to do heavy editing work on your PC as well.

Are Gaming PCs Worth it?

Yes, absolutely. A good gaming PC is more than capable enough to become a workstation as well, which means if you’re buying a gaming PC you can also use it for stuff like editing, streaming, and more. You can have the best of both worlds whether.

Find the Best Gaming PC under $1000 That’s Right for you.

While there are plenty of other options we could have included (such as the iBuyPower 240GB SSD Gaming PC), we’ve covered everything you need to know so you can get a clear idea of ​​which PC is perfect for your needs. You have the elegant, the simple, the powerful, and the smooth. Everyone has different preferences so we have done our best to add a lot of variety to the list.

We hope you find what you are looking for on this list. Whether it’s for dedicated gaming or even constant professional work, you won’t be disappointed with its performance for such an incredible price.

If you are also in need of the best gaming monitor, be sure to check out our other articles on the site!