Every gamer has their own personal preference of platform to play on. Some prefer consoles like Xbox and Playstation, while others stick to PC gaming. But on every platform, there are influencers who are a league above the rest–and it’s not just skill that got them there.

That being said, Ninja is arguably one of the best PC gamers in the world. He is best known for being one of the top Fortnite players in the world. Ninja has been streaming on Twitch for a very long time and his millions of followers watch his live streams regularly. On his Youtube channel, he has more than 22 million subscribers! All of these factors have helped him in becoming the face of Fortnite. And when someone gains that many followers in the gaming community, people pay attention!

From tactics to accessories, amateur gamers are always eager to know the secret behind their favorite gamer’s success. With that being said, one of the biggest questions fans are asking is, which PC does Ninja use? If you’re one of them, then this article is for you. So, let’s begin:

Which PC Does Ninja Use? 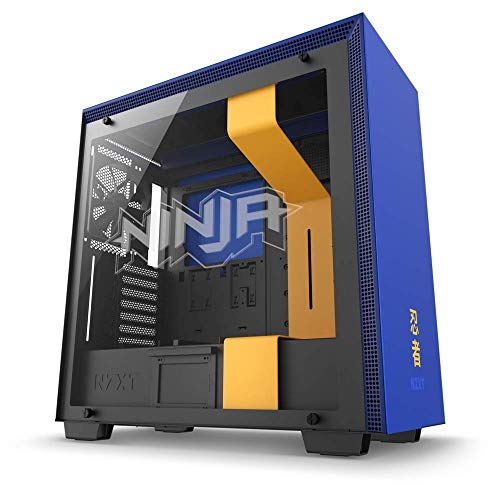 The NZXT H700i is another excellent product by NZXT, which is known for making top-end gaming towers. The NZXT H700i is arguably the best product the company has to offer as of today. This model was released back in 2018, but is still one of the best towers money can buy. If your budget is somewhere around $300, you can buy this on Amazon. On top of all the great features, this product has to offer, there are many positives reviews by happy customers on Amazon.

Let’s explore the specifications of the NZXT:

It is encased in a removable, Ninja-decaled glass panel, allowing for easy hardware diagnostics and cleaning. Moreover, it contains a built-in digital RGB and fan controller, powered by CAM. On top of that, there is adaptive noise cancellation, so you can enjoy your gaming session without any buzzing.

After buying an incredible gaming tower, the next thing you’ll need is a beastly graphics card. Ninja uses the 2080 TI XC Ultra card from NVIDIA for his gaming sessions.

So, now that you now know just about every aspect of Ninja’s PC, you can get out there and get gaming with more power than ever!